"Though the fierce winds of the hatred of the wicked doers blew and beat on this Lamp, He was, at no time, in His love for Thy beauty, hindered from shedding the fragrance of His light. As the transgressions committed against Thee waxed greater and greater, my eagerness to reveal Thy Cause correspondingly increased, and as the tribulations deepened—and to this Thy glory beareth me witness—a fuller measure of Thy sovereignty and of Thy power was vouchsafed by me unto Thy creatures."  Baha'u'llah , 'Prayers And Mediatations'

'His feet were placed in stocks, and around His neck were fastened the Gara'-Guhar chains, infamous throughout Persia for their galling weight."  Nabil's Narrative, 'The Dawnbreakers' 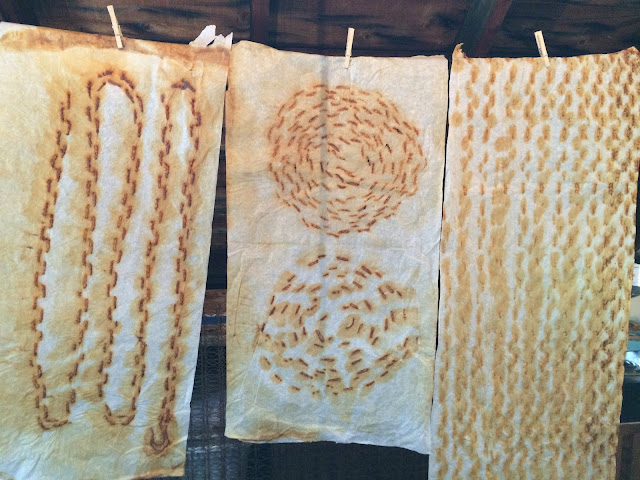 "A Revelation, hailed as the promise and crowning glory of past ages and centuries, as the consummation of all the Dispensations within the Adamic Cycle, inaugurating an era of at least a thousand years’ duration, and a cycle destined to last no less than five thousand centuries, signalizing the end of the Prophetic Era and the beginning of the Era of Fulfillment, unsurpassed alike in the duration of its Author’s ministry and the fecundity and splendor of His mission—such a Revelation was, as already noted, born amidst the darkness of a subterranean dungeon in Ṭihrán—an abominable pit that had once served as a reservoir of water for one of the public baths of the city. "  Shoghi Effendi, 'God Passes By' 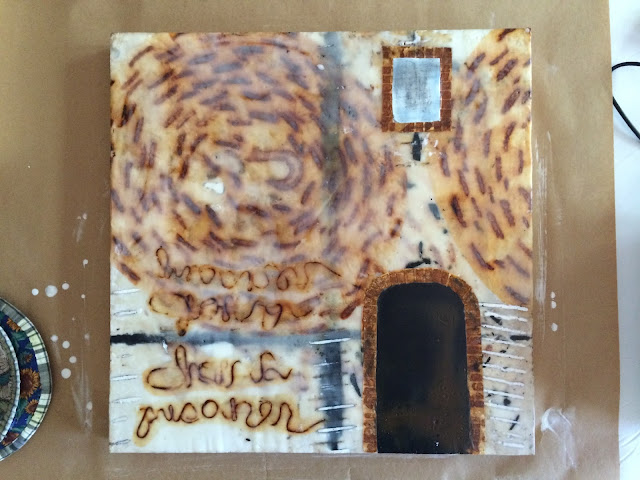 In the piece the entrance to the Síyáh-Chál ( named "the Black Pit") is painted with black beeswax and resin then rubbed with rust dust.

"The Siyah- Chal, into which Baha'u'llah was thrown, originally a reservoir of water for one of the public baths of Tihran, was a subterranean dungeon in which criminals of the worst type were wont to be confined. The darkness, the filth, and the character of the prisoners, combined to make of that pestilential dungeon the most abominable place to which human beings could be condemned."  Nabil , 'The Dawn Breakers'

The window in the upper right hand side of the piece is the window in the prison city of Akka, where the pilgrims after months of travel were allowed to see glimpses of Baha'u'llah's Face. It is a symbol of hope.

"The few pilgrims who, despite the ban that had been so rigidly imposed, managed to reach the gates of the Prison—some of whom had journeyed the entire distance from Persia on foot—had to content themselves with a fleeting glimpse of the face of the Prisoner, as they stood, beyond the second moat, facing the window of His Prison. " Shoghi Effendi, 'God Passes By'


In "The Suffering" I have place the words "chains" and" Prisoner"mirroring each other, symbolic of the Twin Manifestation of God , The Bab and Baha'u'llah both of whom were imprisoned and placed in chains for Proclaiming their Faiths.

Creating this piece was heart wrenching for me, because of the subject. It was also challenging to use  symbolism in my art.  Many times I wanted to walk away from the piece, so heavy was my heart, but could not leave it unresolved.
I started with the rust printing and then collaged  the prints with encaustic medium (bees wax and resin). There are many layers (at least 4) which give the piece a sense of depth, although, difficult to see in photos. Other encaustic painting technics such as incision rubbing  and scrapping are use to finish the piece.

"The Suffering"  and "The Tablet's of the Divine" (see next blog post) were created for my art project for The Wilmette Institute course on "The Bahai Faith and the Arts". To  learn more about Baha'u'llah and the Baha'i Faith you can go to http://www.bahai.org , or ask me:)
Posted by Cathy Missaghi at 10:39 AM